Domestic violence needs to be fixed 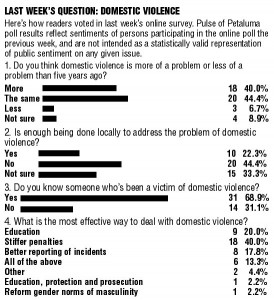 Nearly seven out of 10 people who participated in the March 11, 2010 Argus-Courier online poll say they know someone who’s been a victim of domestic violence.

Forty percent think it’s more of a problem than five years ago, and 44.2 percent say not enough is being done locally to address the problem.
Here are some of the comments by those who responded to the survey:
——
“Even with the high level of enforcement and education over the last 10 years where this subject has been front page, victims still enable the abuse by refusing to use available services and legal prosecution of the offenders.”
——
“Longer jail sentences are the only effective deterrent.”
——
“Sometimes things go too far. My wife fell and broke her arm. The nurse at the emergency room hounded her to have her make a complaint that it was domestic violence. I wasn”t even home when it happened.”
——
“There would be less violence if parents raised their children the right way and taught them right from wrong. Sadly, people who know no better and love to beat up loved ones, like to breed. And so the cycle continues.”
——
“Thanks to the V-Day Petaluma group for producing ‘The Vagina Monologues’ for the second straight online casino year to raise money to increase awareness of domestic violence and to help stop violence against women.”
——
“They should be made to endure the same fate as was given. This should be done in public. Have no mercy for these sorry bastards.”
——
This is an important issue that most men avoid discussing.”
——

“Unfortunately, domestic violence is still a very serious problem. Witness the murder of Buapha Mullennix in her home.  Fortunately, we have groups such as the YWCA Women’s Safe House, Domestic Violence Services, Petaluma People Services Center’s Girls Circle and BRAVE People, a local organization that supports women and girls.”
——
“The perpetrators of domestic violence should have the crap beaten out of them, and then be thrown in a ditch in the rain to rot.”