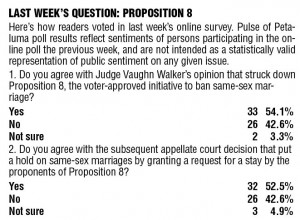 A little more than half (54.1 percent) of respondents to the Argus-Courier’s online poll Aug. 19, 2010 agree with Judge Vaughn Walker’s opinion that struck down Proposition 8, the voter-approved initiative to ban same-sex marriage.
A similar number (52.5 percent) agree with the subsequent appellate court decision that put a hold on same-sex marriages by granting a request for a stay by the proponents of Proposition 8.
Here are some of the comments by those who participated in the survey:
——
“All of the arguments against gay marriage are full of holes. We heterosexuals  haven’t made a very good showing of staying married or taking care of our own children! And we are judging others who simply want the right to love each other and have it official?”
——
“The judicial branch of our government has the job of protecting the Constitution from the sentiments of the majority that may encroach on a minority of citizen’s rights. This is what happened in this case. Judge Walker’s ruling was appropriate.”
——
“This decision will be overturned by the U.S. Supreme Court, and the stay will remain in effect until then. Marriage is, by definition, a lifetime commitment between a man and a woman. Other ‘partnerships’ are not marriage and can never be marriage, no matter how much ‘marriage envy’ their proponents have — they can’t stand that true married couples have something they don’t have, so they want to ‘redefine’ it. Sorry, you can never redefine marriage.”
——
“Gay marriage may be unnatural, but our Constitution gives everyone the same rights. The Supreme Court should end gay marriage bans. It’s no skin off my nose what they do.”
——
“Most of us don’t care about the gay marriage issue; it’s the fact that every time the voters approve something, these jackass judges won’t enforce it.”
——
“Proposition 8 is ‘Hey, what do you guys think?’ It has no grounds constitutionally. Popular vote is a misnomer as the lies and deceit of political campaigning and distortion by those who fund and create these ‘popular’ campaigns are a travesty to our democracy. Prohibition, women’s right to vote, slave holding, interracial marriage, etc. are all products of the ‘popular vote.’ As an American, a veteran and a father of a gay daughter, I find it offensive that the tyranny of the majority could quash the rights of the minority.”
——
“I believe our country was based on the phrase ‘under God’ and that’s why we have been, up till now, a great nation. The Bible says marriage is between a man and a woman to create children, without the use of labs.”
——
“If two people of the same sex want to live together, so be it. However, a marriage is between man and woman.”
——
“It’s been a slow process, but Judge Walker’s considered and intelligent decision is a step in the right direction. Supporters of Proposition 8 offer shallow, illogical arguments that are mere demagoguery. And as far as Proposition 8 being ‘the will of the people,’ when the ‘will of the people’ is both morally wrong and unconstitutional (think slavery in the 1800s and segregation in the 1900s), then it cannot stand.”
——
“It’s simple, really. There’s nothing more pure to the pursuit of happiness than to walk down the aisle with the one you love. To deny that to anyone because you don’t like it is selfishness of the most un-Christian sort. Besides, misery loves company. Marriage rights for all.”
——
“Discrimination is so un-American.”
——
“Marriage should be allowed between any two consenting adults — period. Some are saying that the purpose of marriage is procreation. So should all married couples be forced to have children even if they wish not to? No. I see the real reason for the opposition of freedom of marriage (as well as birth control and equal rights for women) by most organized religions is that they want their followers to breed more followers. No more, no less.”
——
“Individuals have a right to believe what they choose. They do not, however, have a right to impose their beliefs on others unless it is causing harm to someone. Gay marriage causes no harm. Those opposed may feel emotional suffering because they so firmly believe it is wrong; but that is just a difference in belief systems. I can think of no greater violation than to impose one’s own belief about what or who God is on to another person. Homosexuality is as normal as heterosexuality; it’s part of nature. It’s time to become motivated by love instead of fear.”

——
“It’s our polarized politicians who are inspiring this hate mongering. Let’s just all look at each other, decide we’re all human beings, and let everyone enjoy the freedom to choose with whom they most want to spend their lives.”

——
“It was prudent to wait until this gets to the higher court before restarting marriages that may be invalidated. It will be interesting to see if this is declared a federal civil rights issue and therefore trumping all the states authority to define and administer marriage for heterosexuals only.”
——
“I do not think this should even be a voting issue! How can one person have say over another person’s decisions or feelings? Who cares if they want to marry someone of the same sex? Marriage is no longer a ‘religious act,’ so those opposing it because it’s against your religious beliefs need to give it a rest. If you condemn them for wanting to be married, you need to start protesting and condemning all those families with children out of wedlock, or families where people are in relationships but not married. And you need to protest those just as loud as you do against gay marriage. Otherwise, it is only because you are ignorant, and are full of hate toward gay people — not because you think it’s ‘religiously immoral’ (now that is an oxymoron. Seriously, people, get off your high horses. If you are so afraid of catching ‘the gay,’ then move to Idaho and get yourself five wives.

——
“Maverick judges overruling the will of the people by fiat. thought Amerika was a democracy (actually a Republic) with the citizens votes counting — not overruled by tyrants.”
——
“Personally, I’m not really sure why some folks (a majority actually) think same-sex marriages are somehow detrimental to society. However, if the voters in the state of California are violating some law with the passing and enactment of Proposition 8, it’s not Prop. 8 that needs to be changed or halted. It’s the law they are violating that needs to be changed.”
——
“Religious quacks, mainly from Utah, were behind the whole mess; they have no standing, no injury. Meantime, fine people are having their lives put on hold.”
——
“Same-sex marriage has slowly but surely gained acceptance as the years pass. With patience it, would have only taken a few more years to become acceptable to the voters and would not have to be fought out in courts.”

——
“Since when does a judge get to overturn the will of the majority of the voters?”
——
“The judge himself is a gay man and should never have heard the case. Marriage is between a man and a woman. Period. There is nothing the gay man or woman can’t have except this one thing — they can get all the documents they need for death benefits, make children, adopt children, be at a loved one’s side at death — the whole deal — but marriage. And that’s all they want — sorry. Move to a state where it is legal — and how that happens, aside from paying off the electeds, I don’t know.”
——
“This is not a democracy when a single judge can dismiss votes by the majority. Too many liberals don’t like what they are dealt so they change the game. It was put to a vote and was voted on by residents of California. It is what it is. There’s no reason for anyone to go to the polls and vote in the future if this judge’s actions are not contested. All it means is that our votes don’t count and a high-ranking official will take the votes in and then do whatever they want to do. It’s a joke!”