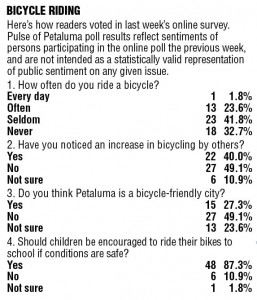 Twenty-seven percent said Petaluma is  a bicycle-friendly city, while 49 percent said it is not. Some 87 percent said children should be encouraged to ride their bikes to school if conditions are safe.
Here are some of the comments by people who responded to the survey:
——
“I can’t trust car traffic enough to feel safe riding a bike on the roads here, which is a shame.”
——
“The days of allowing your kids to ride a bike around town are long gone. Way too dangerous out there now.”
——
“I stopped riding my bike in Petaluma because I was almost hit so many times. The combination of unaware drivers and scarcity of bike lanes make me feel unsafe. I’d love to see this change and be able to start riding my bike here again.”
——
“I would love to see a network of dedicated bike paths in town.”
——
“I live and work in Petaluma. I tried to commute for a couple years five years ago. While most drivers are aware of bicycles there are enough that do not see or care about bikes to make it too dangerous for me to ride. After having to bail over the curb once and having my bike run over after I had just bailed another time, that was enough.”
——
“Bicycling is great for a host of reasons: Healthier for the rider and the planet, quieter, less dangerous to others, awakens the senses and heightens the sense of community, less expensive and uses less parking space, reduces smog and CO2 emissions, and diminishes reliance on foreign oil (which lessens the political impetus to invade other countries like the mess we’ve created in Iraq).”
——
“I would ride my bike more if I felt safe. Sharing the road with cars is not a safe option in my opinion. Hopefully, Petaluma will have more dedicated bike paths in the future.”
——
“Petaluma has a number of bicycle lanes on major arteries, but getting between the east and west sides of town in either direction is daunting. If that issue were somehow addressed and bicycle riding were publicly promoted and embraced by city leadership, the bike friendly culture would improve significantly.”
——
“Petaluma (and the PPD) need to embrace bike (and running/walking) events through downtown. It is great for business, as well as being great for raising awareness that more people need to get out and get more exercise.”
——
“Pretty hard to ride home with a stack of lumber on a bike as some would have you do.”
——
“Some areas are very friendly to bikes while others are not. I’d like to see if there is some ‘low-hanging fruit’ to improve conditions in certain areas and major thoroughfares. It would be helpful to see recommended routes available online.”
——
“Maybe if enough people start riding bicycles as a whole, people will lose weight, get fitter and the greedy gas companies will not make as much income.”
——
“The bicycle supporters are overestimating bicycle ridership. The Planning Commission keeps wanting more bicycle and pedestrian usage in the new shopping centers, but no one going to Target or Lowe’s is going to go on a bicycle and try to carry home large items on it. It is all politics.”
——
“Safety laws should be taught to children prior to bike riding in bike lanes. The exercise a gets child riding a bicycle to school would be wonderful.”
——
“All road construction/repair should include a bike lane. Encourage people to ride!”
——
“More bike lanes, lower speed limits for automobiles, more bike racks around town.”
——
“Question 3: Bicycle friendly in the sense of low levels of traffic and courteous drivers. Not so friendly in terms of bike lanes or bike parking.”
——
“Bicyclists sure would be a lot safer if they would only obey the rules of the road.”
——
“Bicycle lanes have really messed up getting around San Francisco in a car or on a bus. Do not let that happen in Petaluma. Think wisely about the placement and establishment of bicycle lanes. Not everyone is physically capable to ride a bike and you won’t be a spandex-wearing hipster all your life.”
——
“Bicyclists have little respect for automobiles.”
——
“Bicyclists are becoming more aggressive and violate the vehicle code on a regular basis. Marin CHP and Sheriff’s actively enforce bicycle laws, Petaluma PD should follow their lead.”
——
“Bike riders are just like car drivers — they need to pay attention to what they are doing. They need to share the road, not curse at drivers and not try and cut us off. They also don’t need specific bike lanes. This is a disgusting waste of money. If you can’t cut the traffic get out.”
——
“I also think they should obey the traffic rules or get a ticket. To many bicyclists break the driving rules making it unsafe for them and car drivers.”
——
“I think there are a lot of nice trails to ride etc., but street wise? It still needs work. And drivers need to pay attention!”
——
“Tax bikes like cars to help pay for roads or get the hell off the street. Bike riders, ‘not children,’ are the most rude and un-safe vehicles on the road. They show No respect for auto traffic and pedestrians at all.”