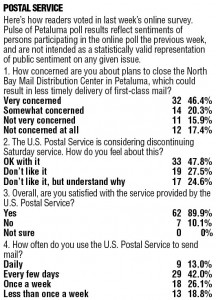 Some 47.8 percent said they were OK with the possible discontinuing of Saturday mail service.  Nearly 90 percent said that, overall, they are satisfied with the service provided by the U.S. Postal Service.

Asked how often they use the Postal Service to send mail, about 42 percent said every few days.

Here are some of the comments by those who participated in the survey:

“Another business being destroyed by unions. They could save billions by cutting Saturday mail, a 14.28 percent labor cut to be precise.”

“Best service for the best price and they go everywhere. It’s our Postal Service. Don’t let them destroy it. Any reduction in service is a step in the wrong direction.”

“Closure would cause mail delay and additional fuel costs. Several congressmen, led by Darrell Issa, want to do to the Postal Service what Howard Hughes did to RKO.”

“I can see where businesses may have a need to receive/send mail every day. As a private person, deliveries on Monday, Wednesday and Friday would work fine. The Tuesday mass ads could be dumped in with Wednesday’s mail.”

“It’s just a sign of the times. The only things that absolutely have to go by mail are solid items you purchase, like clothes or toys. Anything else can be sent much more efficiently electronically. These days, my incoming mail is 90 percent ads and 10 percent bills. What fun is that? It’s time to let go of the post office, even the little rural ones. Open a coffee shop in the same place, and have a nice place to visit. Make sure it has WiFi.”

“I think that if they are going to stop service on a second day, it should be a day during the week so that we don’t have more than one day without mail.”

“The North Bay Distribution Center does an excellent job and I will mourn the loss of quality service. Packages I send from there that get routed via Oakland are always delayed or end up in Portland then back to where they are supposed to go. Never have that problem with NBDC routed packages. I thought it was ridiculous when local post office branches no longer offered local service (ie: mailed from that branch delivered to that branch). All mail had to go through a distribution center then back to the originating post office. Now they want to take it a step further? Mail a letter from Bodega Bay to Bodega Bay and it will have to go to Oakland and back? Tell me how that saves money? Who comes up with this nonsense?”

“You can’t save the Postal Service by cutting services. Only a complete fool, or a politician, could possibly think that would work. The more services are cut, the more people will stop using the Postal Service. Duh!”

“The USPS has been upstaged for many years by UPS, Fed-Ex and the Internet with e-mail. They did nothing to combat them, now they want to close many post offices and not deliver mail on Saturday. They have been poorly run for years along with their union making impossible demands. I say to hell with them.”

“There’s plenty of us who’ve had to cut back due to lack of employment or less, the Postal Service can do the same!”

“It’s not so much the delivery of mail I am concerned about, it’s the fact that even more jobs are being lost. The economy is spiraling down the toilet. The government is doing everything in its power to make it happen. They can talk all they want, but when they boast about creating jobs, and helping small businesses one day, then on the very next day propose to remove small business programs, how is that helping? There are large corporations stealing billions of dollars from small businesses, by fraudulently representing themselves as small, just to get more contracts! So much greed for personal gain. What ever happened online slots to ‘For the people?’ No wonder so many small businesses fail.”

“Just like everything else the cost of providing service is more than the income taken in by the govt. Something has got to give. More competition from UPS and Fed-Ex and less junk mail has contributed to the decline of the USPS. The quality of life in this country has gone down in the last several years due to the greedy rich people getting richer on the backs of the middle class. We need politicians who will speak up for the people!”

“Loss of another 300-plus jobs in the North Bay would be devastating.”

“Since the volume of paper mail has declined, I suppose that I can live without Saturday delivery if it will keep the Postal Service operating. They should never have semi-privatized the Post Office Department. It was a mysterious Nixonian move to weaken unionized employment. Post offices are a focal point for small and rural communities. Look at how the private sector abandoned Santa Rosa Airport for a few years — there’s the future of residential mail delivery under total privatization: Drive somewhere and pick it up. Proponents of a ‘return to constitutionality’ beware: the establishment of a post office is one of the few things clearly mandated in our Constitution.”

“The Petaluma Distribution Center handles the mail for a large part of the North Bay. If this center were closed, it would slow down mail delivery for both residential and commercial. Where would this mail be sorted, if not in Petaluma?”

“Has anybody considered that the real problem with the North Bay Delivery Distribution Center is whoever is running the place? I’ve heard stories about internal policy changes that are driving both long-time employees and commercial customers away. And the no-right-turn sign (after 20-plus years of it being perfectly fine to make a left turn) at the driveway exit is nothing more than a demeaning slap in the face of the public at large. I don’t even think that it’s legal to put a sign there, anyway. What other driveways around town do? I can’t think of any.”

“I can’t understand the logic of closing the much-used mail facility on North McDowell (which is close to many local businesses and two-thirds of the city’s population) while keeping the downtown location on the corner of D Street open. Sure it’s charming and historical, but parking at the downtown spot is a nightmare, as is traffic in the area at many times of day. If they add the mail distribution trucks that frequent North McDowell/Corona, it’ll mean gridlock downtown. The current secondary South McDowell facility isn’t as convenient, but would be more accessible than downtown, especially for many businesses.”