Poll: Most love mural on wall of Phoenix Theater

(This post is from a poll originally printed in the Argus-Courier on April 11.)
A large majority of those responding to this week’s online poll said they loved the downtown mural that is going up on the southern wall of the Phoenix Theater.
About 74 percent said they approved, while 18 percent disliked it. About 8 percent weren’t sure.
Here were some of the comments.
——
“I love, love, love it and only hope this is just the beginning! Petaluma can certainly use more art!”
——
“I don’t like it myself, but I respect the building owner’s right to have it put there. It’s also well done, it’s just not my taste. There’s got to be room for all of us, and art is often an expression of that.”
——
“I love it. It brightens an otherwise dismal and un-seen wall downtown. We should allow more artist to liven up our surroundings like this.”
——
“I love the idea of the mural but was not a fan of how it came out I feel something that better represents Petaluma would have been better.”
——
“It’s a little bit country. And a little bit rock ‘n roll.”
——
“I think Ricky should be given more buildings to work on!”
——
“It is a bit vivid for my taste, but it does catch the eye and it looks better than graffiti. I neither love nor dislike it.”
——
“I wish that Petaluma’s largest mural would represent the city and its heritage as a chicken and egg dairy.
——
The mural has large buildings and is more appropriate for a metropolis than for a bucolic small town. It’s a shame that all that effort was wasted on an out of place random piece.”
——
“This is wonderful public art. Thanks to our artist and his boosters for turning a blank wall into art for all of us. It’s a worldwide tradition, enriching the city for all of us.”
——
“Brightens up that area — yay for them.”
——
“It is so very nice to see color, especially where it usually isn’t. Ricky Watts has done a great job bending and distorting his shapes to fit the huge wall. I have never seen anything like this done before. This should open the eyes of the public for more commissioned walls. I love it!”
——
“It adds energy to the atmosphere downtown.”
——
“I think it rocks! 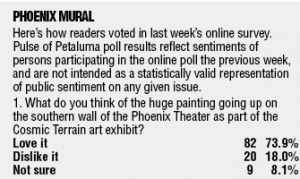