The majority, or 60 percent, of those responding to this week’s online poll said that Sonoma County should not get into the business of providing power through the Sonoma County Clean Power Agency, which the supervisors approved moving ahead with on Tuesday, April 23.
About 34 percent thought it should, and 5.7 percent weren’t sure.
Here were some of the comments.
——
“All they are doing is trying to take a piece of the pie. Anybody who thinks that they are going to save money if they switch is going to be in for a big surprise. I hope the extra money they are spending for this cleaner power will at least make them feel better. It is all coming off the same grid folks.”
——
“This genius idea brings Sonoma into the world of potential sustainability! With this program, done well, we can begin to generate our own power, saving millions now paid to PG&E. Many cities are doing similar programs. Look to Healdsburg — much more independent if and when a grid crisis arises (and it will). Go Sonoma green power! Also called Community Choice Aggregation, this plan puts us on a road to recovery from our overextended energy habits!”
——
“As bad as PG&E can be at times, they are a better alternative. The idea is good but our Board of Supervisors messes up everything that they touch and they will be the ones really in charge of it all. I don’t trust them nearly as far as I can throw them. Just look at the debacle at the county dump, our horrible roads and the slush fund that is the Open Space District (note the complete absence of publicly accessible open space on Petaluma’s side of the Sonoma Mountain). It’s been over 20 years since Petaluma had a representative on the Board of Supervisors who had the needs of all of the people at heart.”
——
“No government agency has ever succeeded doing anything more efficiently than a private enterprise. There is no incentive for a government agency to be efficient.”
——
“There are some things the government should not do, this is one of them. How is it that the county cannot run a landfill but the water agency should be in the power business? Sounds like Enron, but public.”
——
“This will help but it’s not enough. We need a gradually increasing taxes on carbon fuels, where all the revenue is returned directly to consumers, as proposed by the Citizens Climate Lobby.”
——
“Wow, just what the citizens need in this time of economic calamity, another government bureaucracy to support. If you want to save the planet some pain, dry your clothes on a clothes line outside instead of the dryer. Let’s work on lots of small steps, they add up to big changes.
‘That’s my opinion and if you don’t like it, well, I have others.’ — Groucho Marx
——
“All anyone has to do is look at how PG&E runs their business, and their committment to profit over public safety, and it’s clear that we need other choices.”
——
“It works well in areas with a lot of hydro production. Not a good idea for local government to try to navigate the very complicted power market.”
——
“The last thing that Sonoma County needs to do right now is take out a multi-million dollar loan that we taxpayers are responsible for. Gambling belongs in casinos, not on the ‘chance’ that maybe our utility bills will be lower. Anyway you slice it, we citizens will have to pay back the loan, either through higher taxes or higher rates. Don’t do it.”
——
“This increases competition for PG&E. That can be positive for all rate payers. It also increases the mix of clean energy we pay for immediately while giving the county the ability to invest in cleaner power within the county. I believe we should have a choice of power supp 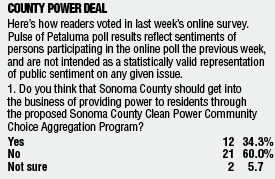