Opinions were divided on a new policy the Boy Scouts of America is considering that would lift its decades-old ban on openly gay scouts. The policy would keep in place a ban on gay troop leaders.
About 36 percent said they disapproved because they wanted to see the rules stay as they are; 44 percent said they disapproved because they thought gay adults should be allowed to participate too, 14 percent approved, and 6 percent weren’t sure.
Here are some of the comments.
——
“As a former scout, I think it is a good thing that the BSA is becoming more inclusive. However, as a private organization, I think they should be allowed to set their own rules just as any other private organization can within the United States.”
——
“If the BSA wants to have nonprofit tax status they should not be allowed to discriminate. Unless you want a date with a person, their sexual preference should not concern you.”
——
“Men who are against gays often are fearful of their own homosexual tendencies.”
——
“Until they lift the ban altogether we will continue our policy of not contributing to the Boy Scouts.”
——
“Homosexuality is neither healthy nor normal. This is just another attack on traditional values in America.”
—— 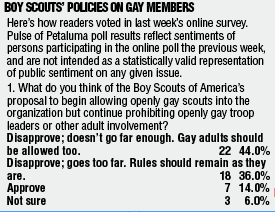