Petaluma Boulevard South was better before the road diet, said a small majority of those responding to this week’s online poll. About 55 percent said they did not approve of the road diet that recently narrowed the number of lanes on downtown stretch of Petaluma Boulevard from four to two. About 41 percent did approve of the changes, mainly because they made the road more bike and pedestrian friendly. About 4 percent weren’t sure.
Here were some of the comments.
­­——
“While I approve of the road diet, particularly the addition of protected left-turn lanes, the signal timing needs to be seriously adjusted, and there needs to be more enforcement and direction during the day while people adjust to the changes. I’ve been cut off multiple times by people who haven’t been paying attention to the lane changes, which is frustrating and dangerous. Overall, this will ultimately make driving through downtown a marginally less stressful event, but it’s going to take a long time to get people used to the new arrangement.”
­­——
“Another big waste of taxpayer dollars! The “road diet” has slowed and backed-up traffic. I missed two signals today trying to turn left from East Washington onto Petaluma Boulevard South because of traffic back-up. The money wasted on this boondoggle would have been better spent paving more road surfaces. The city government officials approving this are a bunch of nincompoops!”
­­——
“As a cyclist, pedestrian, as well as a vehicle-driver, I love the new lanes.”
­­——
“Drove downtown for the last time today. Traffic was backed up on Petaluma Boulevard from Washington Street all the way back to Payran Street. Traffic signals are a mess, and I sat in a line of 30-plus cars trying to turn left three cars at a time through the signal. Crazy. Will avoid the area from now on.”
­­——
“Goodbye to all those clipped mirrors.” 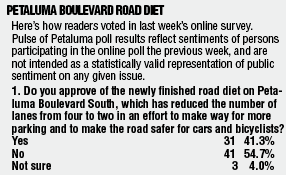