Most people responding to this week’s online poll said that fireworks should be sold for fewer days in Petaluma and that the use of personal fireworks in city limits should no longer be allowed.
Here were some of the comments.
——
“Playing with fireworks is too dangerous to humans and pets. Fireworks also create air and noise pollution that is unnecessary.”
——
“I live in a neighborhood where there are always fireworks, neighbors keep it safe and we clean up afterward. Why take away a privilege from those of us who cooperate due to a few who don’t?”
——
“Not many years ago, the City Council approved a plan on fireworks sales. They would immediately eliminate all those for-profit fireworks sale enterprises. Also, they would reduce the sale days for non-profits by one day each year so they could find other means of raising money until fireworks sales were completely eliminated in Petaluma. Part one happened, but part two has been completely ignored. I love to see stuff blow up and make a big noise as much or more than the next person. But that kind of thing doesn’t belong in public and there is no such thing as safe and sane fireworks.”
——
“I object to fireworks for several reasons: for the elderly, they are very disturbing. For pets, they are life-threatening (more animals are lost on the 4th than any other time or year), For children, they are dangerous (lost fingers or toes). For people in general, they are noise pollution. And for the most obvious reason, they are a fire danger. You cannot assure that the fireworks will be used in “safe and sane” ways, nor where they will be set off. What more does one need to think about an alternative for the non-profits? There truly is no good reason to continue to sell them 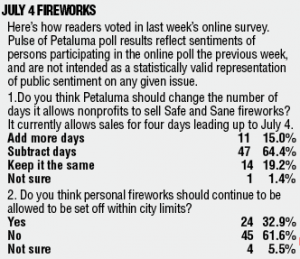 .”
——
“I don’t think they should be sold at all. We do not live in an area where so-called “safe and sane” fireworks should be used or sold. Why? Fires, that’s why. One spark can ruin many lives or even take them. Think of another way to make money.”
——
“Personal fireworks should be illegal for sale or use!”
——
“Legal Safe & Sane fireworks should be allowed within the city limits with the exception of the portions in the southwestern part of the city adjacent to the grasslands. I live in this area and it was one of the most quiet Independence Days that I can recall. An additional day of sales would not hurt. As usual, the illegal fireworks that fly in the sky or explode should continue to be banned.”
——
“Since the city reduced the number of sale days, the fireworks situation has gotten much better, with the vast majority being set off on July 4 rather than for an entire week. I would hate to see us go backwards.”