Poll: Most oppose sales tax increase of any kind

The majority of those responding to this week’s poll did not support a sales tax increase in Petaluma. Most of those who did support a tax increase said that they’d rather see a specific tax, where voters are guaranteed how the money will be spent. The idea of a half-cent tax increase was more popular than a quarter-cent increase.
Here were some of the comments.
——
“I think everyone is tired of blanket tax hikes. It should be specific in its purpose. I think if it were specifically set for fixing roads you’d have a winner, but as soon as you throw in general fund words your yes votes will disappear.”
——
“There must be an earmark as to where the money is to be spent. If it were to go to the general fund then the City Council and City Manager could spend it on day to day operations. There needs to be strict accountability of expenditures.”
——
“Do I want more taxes? No. Do I want to employ more city workers and their retirements? No. However, I am willing to have a sales tax increase for specific, short-term local projects.”
——
“No more taxes! Our city government needs to be more responsible with the funds they already have for our public safety, road repair, and schools. Pension reform is a must or our government will go broke and so we will the taxpayers.”
——
“Taxes are high enough, when I can’t afford things I cut back. The well is dry!”
——
“Will only support a tax that goes directly to the police department. The PD has gone from 78 officers to 62 and there is no hope in sight without a tax.”
——
“Why an increase? So those in charge can line their pockets more? No increase, there should be a decrease in spending and better budgeting!”
——
“Just another tax and spend idea. Why provide the politicians more money to waste?”
——
“Maybe they would have money to fix the roads if they didn’t put a perfectly good road on a ‘road diet’. How much money did that cost, that could have gone to fix potholes all over town?”
——
“No more taxes. Cut off any more money until they figure out how to spend wisely. Not by doing half donkey road repair just so they can use up the budget money in the fiscal year”
——
“Every few years our ‘leaders’ come to the people with their hat out asking for more money. They use scare tactics and doomsday scenarios to try and convince people to hand over more, and more, and more. There’s already supposed to be money budgeted for road repair. Where has that money been spent all these years? Certainly not on the roads, that’s obvious. No more money for those who have proven time and time again to be irresponsible with it.”
——
“City money management is in order. Have the city employees contribute a higher percentage toward their pensions like the restof us !”
——
“Do like the rest of us, live within your means! Don’t keep sending what you don’t have.”
——
“If the city would repave the intersection of Maria Drive and Big Bend, I would vote yes. It’s a ripped-up, chunky broken, jigsaw asphalt mess!”
——
“Increase sales tax for one year to pay for road improvements? I’m listening.”
——
“I thought that the new shopping center will bring in extra sales tax? Where did it go already?”
——
“The Petaluma City Council has been spending the money already available foolishly on such stupid things as “road diets” and traffic circles on truck routes. They are making getting around town much more difficult than it needs to be for both residents and businesses. Until they show a little common sense and regard for peoples’ time I will never vote for a tax increase of any kind. Oh, and then there is the “SMART” train depot with no parking. What are they thinking? Idiots, all of them.”
——
“We have raised taxes enough during years of lower wages, increased costs for water, garbage and power, and social security deductions. I have nothing left to give.”
——
“The mayor and City Council have got to be kidding about proposing another tax increase. California has the highest gasoline sales tax (64.5 cents per gallon), the highest state sales tax in the U.S., and the highest income tax in the U.S. Petaluma city employees enjoy pensions and medical benefits much more generous than the private sector, and now the city wants the taxpayers to tax themselves even higher so these employees can retain benefits we taxpayers can only dream about.”
—— 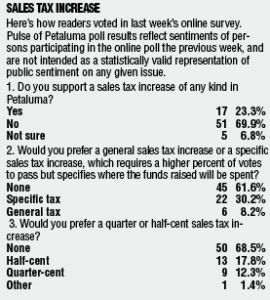