Most people responding to this week’s online poll said that dog owners should be more responsible and aware, with many saying that someone they knew had been attacked as a result of a dog being off-leash. Most were satisfied with Petaluma’s current leash laws.
Here were some of the comments.
——
“I just wish that they would enforce the leash laws. My neighbor has a dog who gets out all the time without a leash and the police have stopped to corral the dog, but have never issued a citation. What good is a law if you’re not going to enforce it?”
——
“I think cleaning up after dogs is more of a problem than dogs off a leash; far too many times people let their dogs ‘do their business’ and don’t clean up after and just leave it on the sidewalk! Rude!” 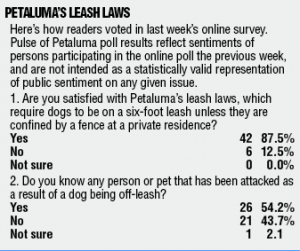 ——
“The retractable leashes that everyone uses extend longer than six feet and give people no control over their dogs. They should not be allowed.”
——
“We walk our small dogs on leash at Wiseman Park. There are a ton of dogs running around off leash and we have had several instances of other people’s dogs running at ours. Can’t teach common sense.”
——
“Unless a law can be enforced and incidents followed up, what good is the law?”
——
“Our dog has been attacked a few times in Petaluma by dogs off leash. We are tired of hearing, ‘My dog is friendly’ only to have them try and bite our dog. Why take chances? Walking a dog on a leash is very little effort to ensure people and dogs stay safe.”
——
“My father’s knee was mutilated by a pit bull on a long leash. It ended up wrapping around his leg which brought the animal even closer to him. Regardless of how long the leash is, owners should face criminal charges when their animal attacks a person.”
——
“It’s just responsible pet ownership to keep your doggie on a leash, for the dog’s safety as well as the safety of others. Sadly, there are a lot of people that don’t think the laws apply to them.”
——
“Leash laws should be better enforced. We have had many unleashed dogs run at our young kids at the park on the east side where we live. Owners just don’t seem to care.”
——
Just the other day my friend was out, taking a walk in her neighborhood, and she passed by another pedestrian who was walking a dog on a leash. As the two passed by each other the dog spontaneously jumped up and bit my friend’s arm. Luckily my friend was not badly injured (although the dog did break the skin, and left a nasty bruise), but most importantly, the dog was on a leash. One can only imagine what might have happened in a similar situation in which the dog was off leash. Animals, like people, can be unpredictable. I am not saying that we can prevent every accident with a leash alone, but it certainly helps to cut down on the potential. Isn’t that enough?”
——
“I have two dogs and strongly believe that dog owners must be responsible! An unleashed dog that is well-trained and fully under voice control is not a problem. But all the people that erroneously believe their dog is fully under voice control, now that is the problem. People just need to use a leash when not a a designated dog park. It is simple respect.”
——
“I‘m also concerned with the lazy people who don’t bother to clean up after their dogs take care of business. They don’t seem to care if the dog goes on someone else’s property. After all, they don’t have to clean it up.”