Most people responding to this week’s online poll said it was a bad idea for the City of Petaluma to join a lawsuit to stop the Graton Resort & Casino from opening in Rohnert Park, as it is scheduled to do in November.
About 82 percent opposed joining the suit, while 16 percent approved.
Here were some of the comments.
——
“Absolutely not. It’s kind of like closing the barn door after the horses got out.”
——
“A little late I would say.”
——
“Enough of the ‘lawsuit’ norm that is becoming Petaluma. Keep the funds for things that matter!”
——
“Fix the roads, build the Ranier connector.”
——
“It is out of local control after the land becomes a trust. With two weeks to go before the grand opening, you’re not going to stop it.”
——
“No! Fix the potholes first, help the homeless, and stay out of other city’s affairs! Yeah, I know, ‘But it affects us, all the traffic and crime.’ Too late: It is built and going to open on Nov. 5! Let the good times roll.”
——
“Please fix our roads instead.”
——
“No. First, at this point, pretty much nothing can stop the Rohnert Park casino from opening. Second, with that casino in operation, who would go to any other casino in this area?”
——
“Stop wasting time trying to stop something that is going to happen (the casino opening) whether you like it or not.”
——
“Waste of time and money. They are already in — too late now.”
——
“We need road and street repairs most of all. Why waste money on a battle that can’t be won?”
——
“It will create increased 24/7 traffic on the Highway 101 corridor, increased crime potential as casino commuters browse Petaluma on their ‘way through,’ drunken driving, erosion of quality of rural environment, and last but not least: A potential wedge for development of casino stuff closer to Petaluma.”
——
“You all voted to give ‘native Americans’ the right to build casinos many years ago. And now you don’t want them in your backyard. Hypocrites.”
——
“Absolutely not! The City of Petaluma needs to stay out of it. Chip Worthington and his group are just trying to weasel money and influence out of the city to help finance their losing battle. If the City wants to fight a casino south of town then go for it, but don’t jump into bed with Chip and his gang.”
——
“No! The casino is a done deal. Stop wasting money on things not in the city like Lafferty Ranch, the casino, Dutra asphalt plant, and the Roblar Quarry. Focus on our roads and parks, please. Maybe we need new leadership that can listen to the community.”
——
“Yes, and the Board of Supervisors should, too.”
——
“No lawsuit will stop the casino from opening, there’s too much big money behind it. It would only be wasting the Petaluma taxpayer’s money.”
——
“ I would prefer my tax dollars be spent on youth programs. and senior citizen programs.” 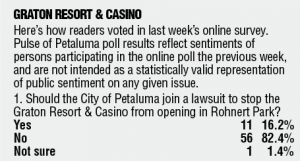